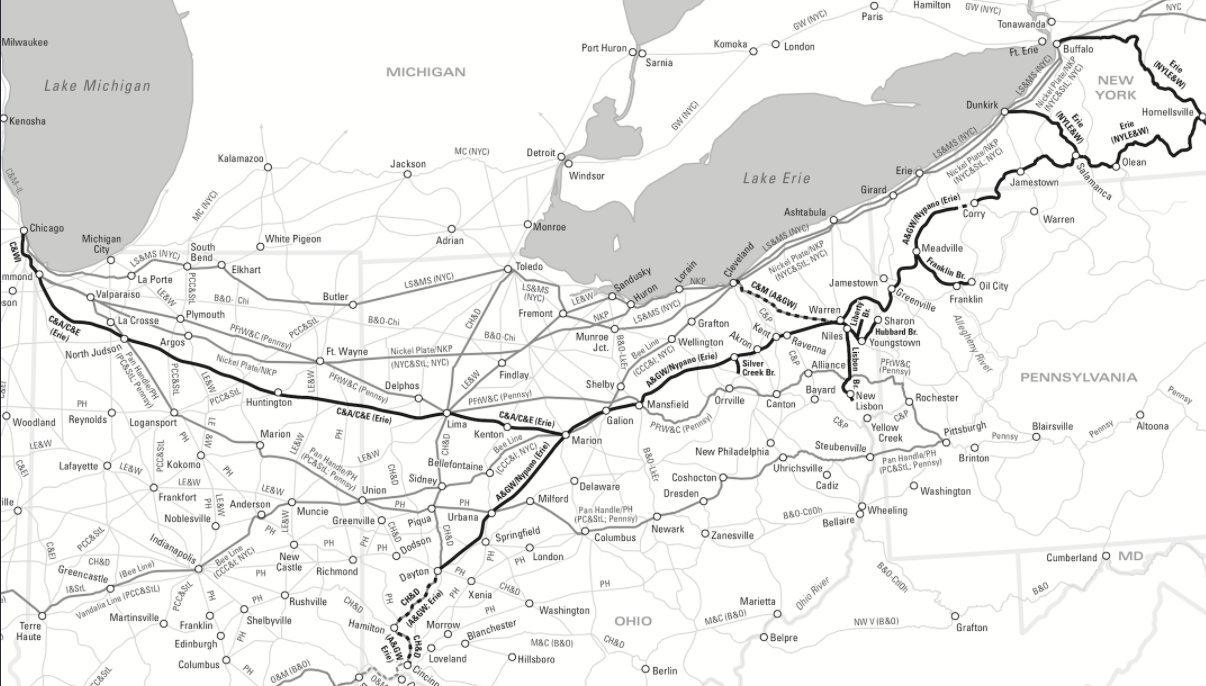 On March 10th 1851 Marvin Kent, a merchant from Franklin Mills OH (now Kent) chartered the Franklin and Warren Railroad to connect the two named local business communities. After Kent’s initial intent to build to the nearby Cleveland and Pittsburgh Railroad was scuttled by Ravenna businessmen, he secured a broadly worded Ohio charter to build a railroad “to any point within the state and connect with any other road.” Now, as his aspirations grew, he sought the involvement of prominent Warren native sons Simon, Joseph and Jacob Perkins even prior to a Cleveland conclave in 1852. Simon was president of the Akron Branch Railroad (“Coal Hill” line), while Joseph and Jacob Perkins had organized the Cleveland and Mahoning Railroad in 1848 that extended from Cleveland to Warren. Kent envisioned a railroad reaching Cincinnati on one end and the Pennsylvania state line on the other. At either end, he foresaw connecting with other railroads headed to New York and St. Louis. To more accurately reflect his intentions, Kent renamed the railroad The Atlantic and Great Western Railroad (Ohio; A&GW-OH) on November 23rd 1854.

Meanwhile, in Meadville PA local lawyer and businessman William Reynolds was also seeking to build a railroad to connect Meadville with larger centers of commerce. He was urged on, in part, by Dr. D. Allen of Kinsman OH who sent a letter in February 1851 suggesting a way “under a plan of a road to Pittsburgh” to capitalized on a branching rights charter provision of another Pennsylvania railroad to build an east-west “lateral” road across northern Pennsylvania. At the same time, the New York and Erie Railroad (Erie) had completed its main line from near New York City to Dunkirk NY, on Lake Erie, by 1851. Following the 1852 Cleveland conclave with Kent, Jacob Perkins, Frederick Kinsman, Reynolds and representatives from the Erie among others, the Erie moved to expand its footprint west. It funded a survey of Reynolds’ envisioned route through Pennsylvania, connecting New York with Ohio. By now Reynolds and Kent were collaborating, and soon the Meadville Branch Railroad became the Meadville Railroad (1857) and finally the Atlantic and Great Western of Pennsylvania (A&GW-PA) in 1858. Together, Kent and Reynolds then worked with local businessmen in Jamestown NY to fund and build a railroad connecting with the Erie at Little Valley NY on one end, and the A&GW-PA on the other. The Atlantic and Great Western in New York (A&GW-NY) came to life in 1859, with many of the wood ties needed for both it and the Pennsylvania road supplied by Warren native Warren Packard, who owned thirteen sawmills between Warren and Jamestown NY.

Although the state roads remained legally separate they operated jointly until officially combined in 1865. What became the Atlantic and Great Western Railway (A&GW) was the only major railroad constructed during the Civil War – extending 388 miles from Little Valley NY (renamed Salamanca in 1862) to Dayton OH. The line was built to the Erie’s unusual 6’ gauge (distance between the rails), allowing the first long distance travel between New York and St. Louis without a change in gauge by the time it opened in 1865. To build the railroad, Kent and Reynolds arranged nearly all of it’s funding in London and Paris through notorious Liverpool financier-cum-broker James McHenry. In so doing they lost financial and operational sway, by 1864, to English and European stock and bondholders whose proxies he controlled. McHenry orchestrated Kent and Reynolds departure in 1864, and remained in control of the A&GW until the mid 1870s. During that time, from 1872-1874, he surreptitiously took board control of the Erie and installed A&GW puppet Peter Watson, of Ashtabula OH, as its president.

A key to the early financial stability of the partially constructed A&GW was the 1863 long-term lease of the Perkins’ controlled Cleveland and Mahoning Railroad. With access to Cleveland and Lake Erie by this road, via an intersection in Leavittsburg, the A&GW could carry a substantial volume of oil and coal products to/from New York and Cleveland before the full length of the road was completed. In fact it is said that the first “tank car” in the U.S. was used on the A&GW-owned branch line between Meadville and Franklin PA. And although the Perkins’ road was built to the Ohio gauge of 4’ 10”, the A&GW laid a 3rd rail over the roadbed to accommodate the 6’ broad gauge of its locomotives and rolling stock.

While a series of bankruptcies and reorganizations befell the A&GW, by the early 1880s it (as the New York, Pennsylvania and Ohio: Nypano) was under charge of the Erie (reorganized as the New York, Lake Erie and Western: NYLE&W). The Erie had, in turn, taken control of the partially graded, narrow gauge Chicago and Atlantic Railroad. This road controlled a right-of-way extending to Chicago from a connection with the Nypano at Marion OH. Finally on June 16th 1883, after the Erie and Nypano funded completion of the line and secured a long-term lease, the Erie’s first train from New York rolled into Chicago’s Dearborn Street Station. The last of the major Eastern trunk line railroads had reached the gateway to the west, and secured its place among the great trunk roads of the United States. Today, some of the original A&GW route is part of the CSX mainline through northern Ohio.

Mott, Edward H. Between the Ocean and the Lakes: The Story of Erie. New York: John S. Collins, 1901.