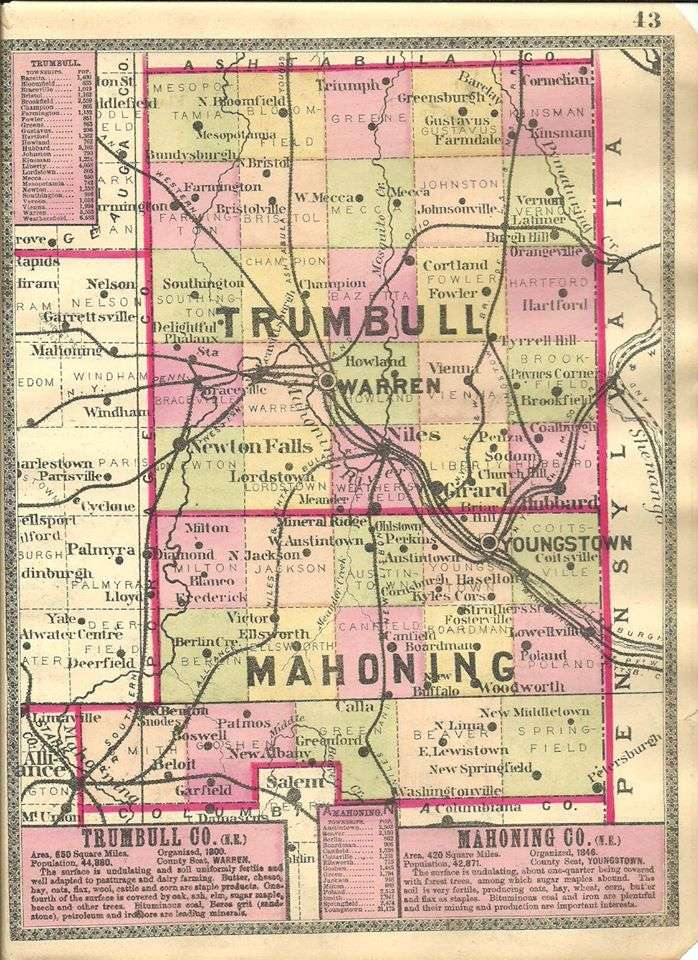 If you were to travel to Vienna, Oh. today you would be hard pressed to find any evidence that a railroad ever entered the town. Fact is, though, that at one time two railroads entered the town, and that, for the same purpose. That purpose was to get coal mined in the Vienna area to market. Back in 1870 Trumbull County was the largest coal producing county in Ohio. The two rail lines going into Vienna were the Mahoning Coal Railroad that came into town from Tyrrell in the northeast with the No. 9 mine branch. The other was the Liberty & Vienna Railroad coming from Mosier (Girard) from the south.

The line was to be an extension of the Church Hill Mining Company’s track which ended at about the intersection of SR 193 and SR 304. There are some reports that instead of the railroad being standard gauge, that is 56 ½ inches between rail heads, that it was an inch and one half wider than standard gauge at 4 ft. 10 inches.

In 1869 the railroad petitioned the Trumbull County Court to settle disputes with property owners over the railroad’s right of way. This had to do with sixteen property owners.The line from the end of the Church Hill Mining Company’s line to Vienna was 5.6 miles. Overall, the railroad from the junction of the Cleveland & Mahoning RR. at Mosier (Vienna Jct. – Girard), to Vienna was about 8 miles. The line generally followed the valley of Little Squaw Creek, which it crossed four times.

South of Liberty St. the railroad encountered a grade of 1.4%. North of SR 304 the grade increased to 1.6%. By the time the railroad crossed Tibbitts-Wick Road, the grade eased to .95%. The elevation of the railroad was 885 ft. at Vienna Jct. (Mosier) to 1155 ft. at the Liberty-Vienna Twp. Line

There were, at least, six branches to various coal mines off of the main track. The branch to the Church Hill mine was a narrow gauge tram way.  The Sodom Branch was 9,347 Ft. long and served the Garfield Shaft, the #9 shaft, and the Morris Bank Shaft.  The main track served the Stewart Coal Company shaft via a ½ milelong lead near mile post 6.5 and the Taylor & Co. siding at Church Hill MP. 2.25

In 1870 The Liberty & Vienna RR. extended it’s line from Girard to Youngstown, but the following year, sold that part of the line to the AY&P RR., later known as the PY&A RR. under control of the Pittsburgh, Fort Wayne & Chicago RR. (Pennsylvania RR.).

The engineer that ran on this line for many years was Matt H. Shay, of Youngstown. He was a famous Erie RR. locomotive engineer that was highly respected by Erie RR. management. So much so, that they named a locomotive after him, which was the largest in the world at that time.

The facilities of the railroad at Vienna Junction (Mosier- Girard), was an office, scale house, water tank, and four tracks.

After 1874 coal traffic on the line started to decline. In 1888, the northernmost part of the railroad, 1.22 miles south of Vienna was retired and dismantled by July of the year. By 1891, the output of Trumbull County mines had dropped to less than 100,000 tons annually.

Stations on the Liberty & Vienna Railroad by mile post.

The Liberty & Vienna RR. did offer limited passenger service daily, except Sunday from its beginning. This timetable was from 1873 and was printed in the Western Reserve Chronicle.

By 1899 the coal traffic was gone and the railroad was taken out of service. Prior to 1921 most of the rail had been removed except for a small portion of the southern end of the line which, reportedly had been in use for a gravel pit and for freight car storage, up until about 1960.

What’s left and what can be seen? The L&V right of way can be seen at Girard Park and Liberty Park. It can be seen at the junction of SR 193 and SR 304 – in the dip along the high tension line. There is also a point just north of the Squaw Creek Country Club.