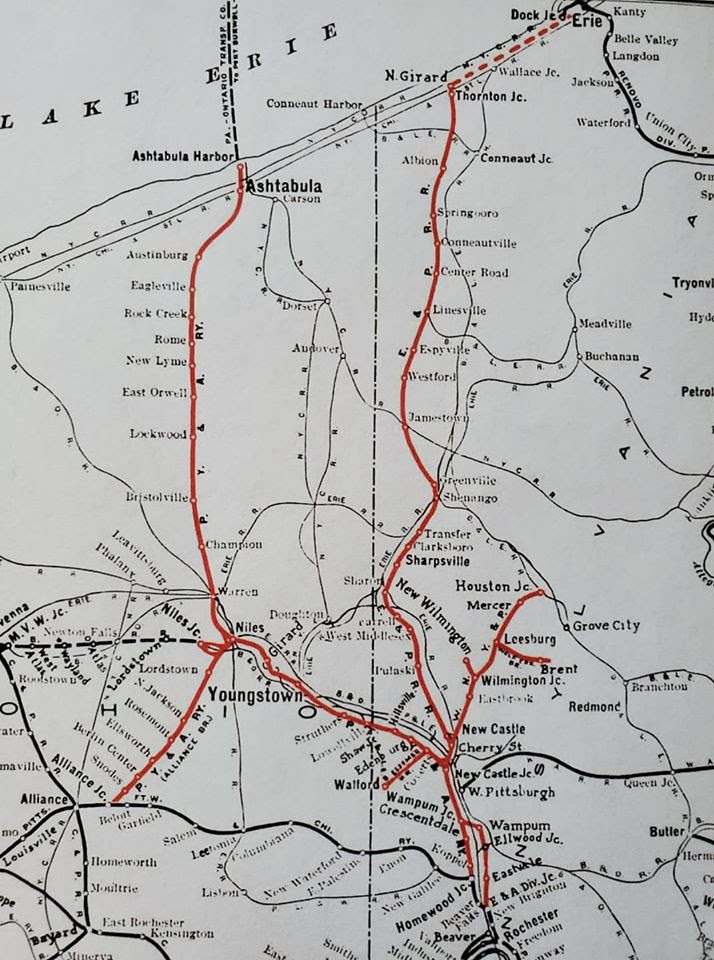 As in many other cases, this railroad was a part of a consolidation of several other railroads. The beginnings of the line started with the Ashtabula & New Lisbon Railroad that was incorporated in 1853 to build a line from Ashtabula to the south to New Lisbon, Oh. with the intent of transporting coal from Columbiana County to Ashtabula.The line was graded 31 miles to the south, but ran out of money. The railroad sat dormant for quite some time. The railroad, eventually was combined with the New Castle & Beaver Valley RR. and the Lawrence Railroad which had built a line to Youngstown in 1868. In 1870 a new company was formed called the AY&P Ashtabula, Youngstown & Pittsburgh Railroad.  This line was able to purchase five miles of railroad from the Liberty & Vienna RR. This allowed for the connection of the AY&P to the Lawrence Railroad. This allowed a continuous line of track from Homewood, Pa. to Ashtabula, Oh., through Trumbull County in 1873.

In 1872 the consolidated AY&P RR. was leased by the Pittsburgh, Fort Wayne & Chicago RR. which was controlled by the Pennsylvania Railroad. Soon after the railroad was completed, iron ore began to move from Ashtabula Harbor to points south. The line name then reverted to the one used in the past – the PY&A.In 1881, a branch was built from Niles, Oh. to the PFW&C RR. near Alliance, Oh. This has been known as the Alliance, Niles & Ashtabula RR. This line was most commonly known as the Alliance Branch, or the Detour Branch.

For many years the PY&A was a part of the E&A Division (Erie & Ashtabula Div.), of the Pennsylvania Railroad.  Later on, it was known as the Lake Division. Under Penn Central, it was known as the Valley Division and under Conrail I believe it was a part of their Pittsburgh Division.The line was a coal and ore conveyor for many years. Coal north, ore south. The line was double track from Rochester, Pa. to North Warren, Oh. Iron ore for the blast furnaces of Warren, Youngstown, New Castle, Pittsburgh, and the Ohio Valley. Coal from the mines of western Pennsylvania destined for the lake port of Ashtabula. The coal went to U.S. points on the Great Lakes and to Canada.

In 1905 there was a line realignment project undertaken. This was to reduce grade and curvature. A new line was built through Waddell Park in Niles to Pine Ave. in Warren to eliminate Warren Hill. The original main track was then abandoned. There were two other parts of this project. One was a reduction of grade from Griswold St. in Warren to a point just north of North River Road. Instead of the original line being abandoned, it was maintained with it’s light rail to serve industrial customers in the “Golden Triangle” area, as was known by railroad men as “the old line.” The other project was to build a new freight yard in the vicinity of the Warren Outer Belt (bypass) near TCTC. This was graded but never built.

Traffic on the line was very heavy which prompted the Pennsylvania Railroad to specially design a locomotive class to handle the line’s heavy mineral freight trains. This was the N-1s class locomotives of the 2-10-2 wheel arrangement. There were sixty of them built by the Baldwin Locomotive works and ALCO Brooks in 1918 and 1919. They were very large locomotives that were designed by the PRR at it’s Fort Wayne, Indiana shop. Because they were heavy “drag” engines, they were limited to a speed of 30 mph., but that was just fine because the track speed was 35 mph. on the PY&A for freight trains. These locomotives were the standard freight power on the PY&A from 1918 to 1949. Quite a long, useful life.

There was passenger service from Pittsburgh to Ashtabula for many years. There were four trains a day in this service – two north and two south. These lasted until taken off during the Great Depression. In the early teens there was a passenger train that ran from New Castle, Pa. to Chicago, called “The Valley Flyer.” It did not travel to Ashtabula, but utilized the Alliance Branch to reach the PRR mainline at Alliance, then on to Chicago, making stops in Youngstown and maybe Niles. The last regular passenger to run on the PY&A was a Pittsburgh to Cleveland train called, “The Clevelander.” It ran from Pittsburgh, to New Castle, to Youngstown, to Niles, then the PRR Alliance Branch to a point called BOANNA. That was a connection to the Baltimore & Ohio Railroad main line at Niles Junction. The PRR had trackage rights on the B&O mainline from Niles Jct. to Ravenna, Oh. where the PRR got on their own track to get to Cleveland. This train left Pittsburgh in the morning and returned from Cleveland in the evening. This train lasted in service until the railroad took it out of service in 1961

The Pennsylvania Railroad’s PY&A Branch later became know as the PY&A Secondary. Coal and ore continued to move over the line under Penn Central ownership that began in 1968. Soon after the Conrail takeover in 1976 the line from North Warren to Ashtabula was abandoned. Later on, a connection was constructed between what was left of the PY&A to the east, to the former Erie Lackawanna Rwy. to facilitate the movement of iron ore from Ashtabula (via the former New York Central Youngstown Branch and Erie Lackawanna), to WCI Steel in Warren. This continued when Norfolk Southern acquired the line.Norfolk Southern then sold the line to Ohio Central who was supposed to handle all local traffic from Girard to Warren, but allowed Norfolk Southern to use the track to WCI Steel. WCI later became Severstal Steel, then RG Steel. When RG Steel closed, that was the end of the iron ore traffic and the Ohio Central was sold to it’s current owner, Genesee & Wyoming, as of this writing. Today, there are very few customers on the line.Today (2020) the Alliance Branch us still intact, but is out of service.