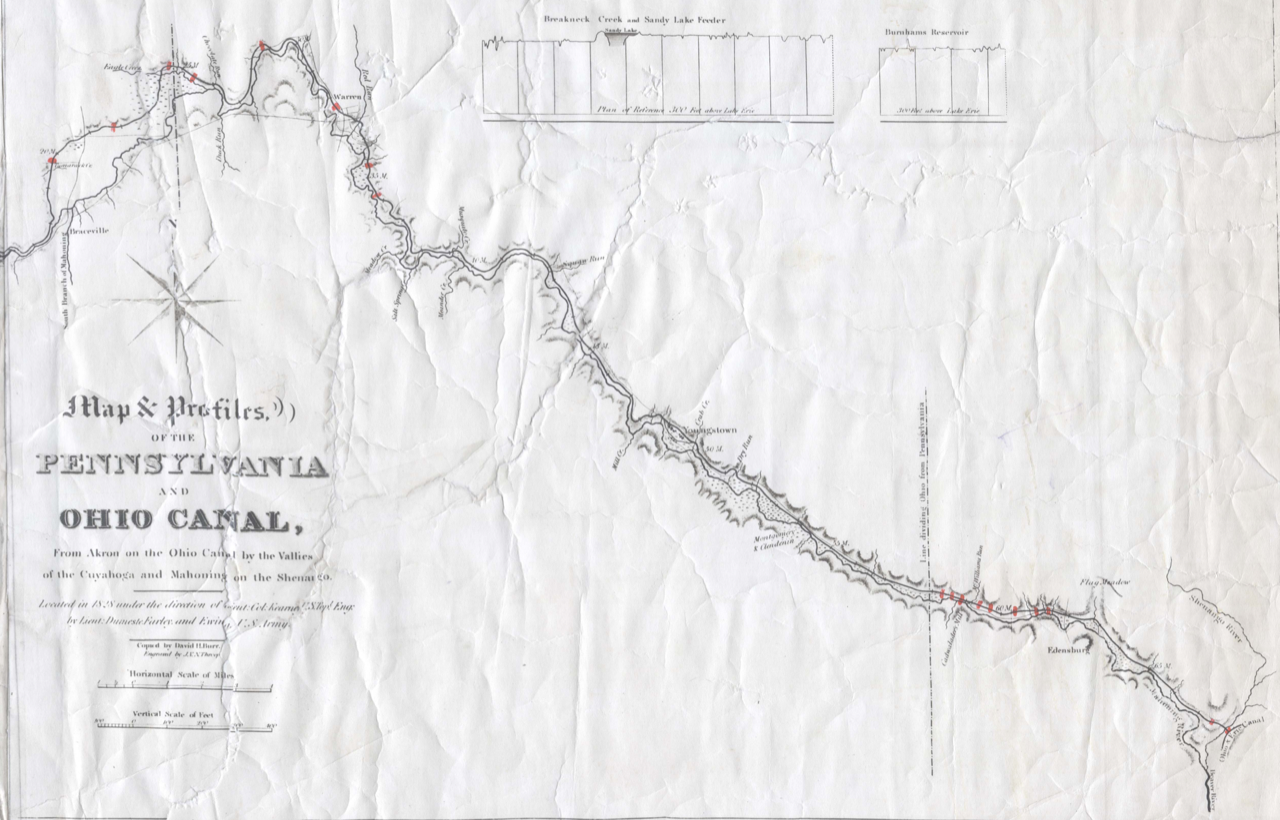 Although, in 1823, the State of Ohio commissioned a survey for an eighty-three mile canal route from Akron OH to Mahoningtown (New Castle) PA that would open as the Pennsylvania and Ohio Canal (P&O) in 1840, concerns about funding a project crossing state lines scuttled its proposed construction. The business proposition was compelling, however, to recapture some of the Pennsylvania-to-Lake Erie traffic lost to the Erie Canal. The P&O would provide a short cut, or “Cross Cut” between the Beaver Division of the east/west oriented Pennsylvania Main Line Canal, which served Pittsburgh and Philadelphia, and the north/south oriented Ohio and Erie Canal passing through Akron on its way to Lake Erie and the Ohio River. Only ten miles of the P&O were to be located in Pennsylvania. By 1827 a collection of Ohio and Pennsylvania businessmen chartered a private canal company in both states to capitalize on this opportunity. At a convention held November 13th 1833 in Warren, more than one hundred delegates decided to privately fund the Pennsylvania and Ohio Canal. Nearly half of the investors were from Philadelphia, although Trumbull County businessmen acquired more than $51,000 of stock. Even the State of Ohio bought 4,200 shares.

The P&O route followed the Cuyahoga and Mahoning (West Branch and main) Rivers east from Akron OH to Mahoningtown PA, located at the confluence of the Mahoning and Shenango Rivers, at the headwaters of the Beaver River. In Trumbull County the canal wandered through Newton Falls, Warren and Niles. Because of its lengthy extent along the Mahoning River, locals also called it the “Mahoning Canal” or the “Cross Cut.” Work began on September 17th 1835 when construction engineers struck iron stakes in the ground at the only summit along the route, the “Portage Summit,” 1¼ miles west of Ravenna’s city center. This was the dividing point between the West and East construction divisions, headed by Principal Engineers Sebried Dodge on the West side, and James D. Harris on the East. Local farmers as well as German and Irish immigrants did the work by hand, building and finishing the locks with dressed stones. When completed in 1840, the P&O main line had fifty-four locks, nine dams, and two major feeders to the Portage Summit, covering a rise and fall of 454 feet over the entire distance. There were two aqueducts (water-filled canal bridges) along the way, one over the Shenango River in Pennsylvania and the other crossing the Mahoning’s East Branch in Newton Falls, where three fifty-foot spans were built. Fifty-seven road bridges were also built over the P&O, five of which were in Newton Falls alone. And Lock 22 was also located in town just off North Center and Lock Streets in an area then known as Earlesville.

From the west, the canal entered Newton Township from McClintocksburg paralleling the south bank of the Mahoning’s West Branch before crossing the East Branch and heading northeast along the Mahoning Valley where it entered Warren Township at Center of the World. Toll offices were located at Warren, as well as in Youngstown and Akron. In Newton Falls the P&O used the riverbed near the dam, known as a “slackwater” dam. “Slackwater” described a pool of water created by damming up a stream or river, allowing canal navigation on the created pool. In addition to this feature, which was used frequently along the Mahoning, a channel was dug just west of Lock Street extending eastward to the East Branch. On the other side of the river another channel was dug on its way to Warren Township.  In Warren the canal crossed on a slackwater pool to the north bank of the river and headed toward Niles and to Youngstown beyond.

On April 3rd 1840 the “Mohawk” canal boat from Pennsylvania and the “Tippecanoe” from Warren traversed the full length of the P&O, which officially opened on August 4th.  In its first year, 1,200 passengers were carried, and by 1844 the number had increased to 8,500. Between 1850 and 1854 coal tonnage transported grew from 55,000 to 114,000 tons. But when the Cleveland & Mahoning Railroad, controlled by the Perkins brothers of Warren, purchased the canal in 1854 to eliminate a competitive threat, the P&O’s fate was sealed. It lingered until abandoned in 1872 and was officially closed in 1877. The Cleveland & Mahoning sold the P&O right-of-way to the Pittsburgh, Cleveland & Toledo Railroad in 1881, which became the Pittsburgh & Western Railroad in 1884. Canal transportation had become a thing of the past, although railroads would often pay homage to the well-engineered canal towpaths by using such expertly graded routes for their next generation of transportation.

“Report of the Canal Commissioners, relative to the extension of the Pennsylvania Canal. Read in the House of Representatives, Dec. 19, 1833.” Canal Society of Ohio web site: http://www.canalsocietyohio.org