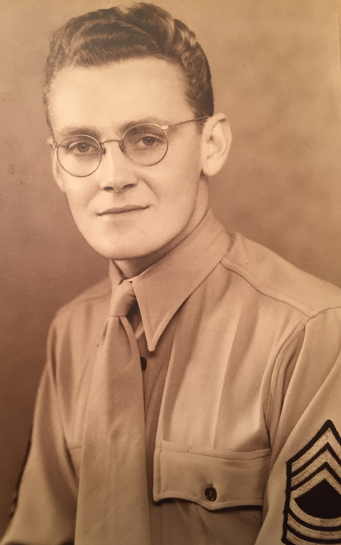 Born and raised in Newton Falls, Tom Kistler graduated in the Newton Falls High School class of 1938. He came from a family with deep roots in town – harkening back to the village’s first election in 1888 and the early Kistler sawmill there. Tom’s father, Theo “Turk” Stephen Kistler, ran the town’s water works for twenty-eight years until his retirement in 1965. Turk was involved in a shootout to thwart a gang of bank robbers in the 1930s, which left the village marshal dead.

Tom would marry his high school sweetheart, Margaret “Peg” Brown just after the end of World War II, in late September 1945. Margaret’s parents owned and operated the local grocery store in Newton Falls, “Cut Rate Market” and then “Brown’s Market,” the first of which opened in 1930. She headed off to college at nearby Oberlin College and returned to Newton Falls after graduation where she taught high school English to many generations of students – including her own brother, Bill.

Like many in his high school crowd, Tom sought local employment after graduation and joined the Ideal Foundry Division of Republic Steel Corporation that had just recently relocated to town. His role as a “general office clerk” was quite straightforward: “Tabulate and file records of castings, prepare payrolls, type. Keep man-hour reports and records. General office work.” However, it would be the recipe for an interesting and fulfilling World War II military career, exposing him to life-broadening experiences both horrific and fascinating.

On November 24th 1941, Tom Kistler was inducted into the U.S. Army in Cleveland. Initially, he ended up as a clerk in the Headquarters of the Sixth Army – destined for service in the Southwest Pacific. He rose through the enlisted ranks within the administrative function of the Sixth Army Headquarters, known as the Adjutant General’s Department. After advancing to the rank of Sergeant Major, Kistler received a field promotion to 2nd Lieutenant in June 1944. As an officer, he directed a staff responsible for administering all enlisted personnel records within what became, at times, an organization of over 200,000 soldiers. Kistler was the first and only person from Newton Falls to be promoted from the enlisted to officer ranks in World War II. During this time, he moved with General Walter Krueger’s Sixth Army Headquarters from Australia to New Guinea to The Philippines, living and working out of a tent for nearly a year on New Guinea and The Philippines.  He left the Army as a 1st Lieutenant on November 19th 1945 – having been separated from his fiancé and family for nearly 2 ½ years, and on active duty during the entire war.

Kistler leveraged on the GI Bill to complete his higher education at Hiram College in 1950, begin his own interior design business (Kistler’s Interiors) that was ultimately located in the store formerly occupied by his in-laws at 44 W. Broad Street, and start his own family of two kids, Kristen (1951) and Kim (1954), with Margaret. By the 1980s, he opened a Hallmark Card shop called “The Red Bag” in the front half of Kistler’s Interiors. He was an active member of the Kiwanis Club in Newton Falls. Tom never mentioned his World War II service before his death in 1994. However, he wrote hundreds of letters home during the war, and these became the basis for creating an extensive manuscript about his experience in Headquarters Sixth Army, and that of General Walter Krueger, its commander. A copy of this manuscript is held by the Trumbull County Historical Society and in the Newton Falls Library’s local history room.

General Walter Krueger, From Down Under to Nippon, The Story of Sixth Army in World War II. Washington D.C.: Combat Forces Press, 1953.