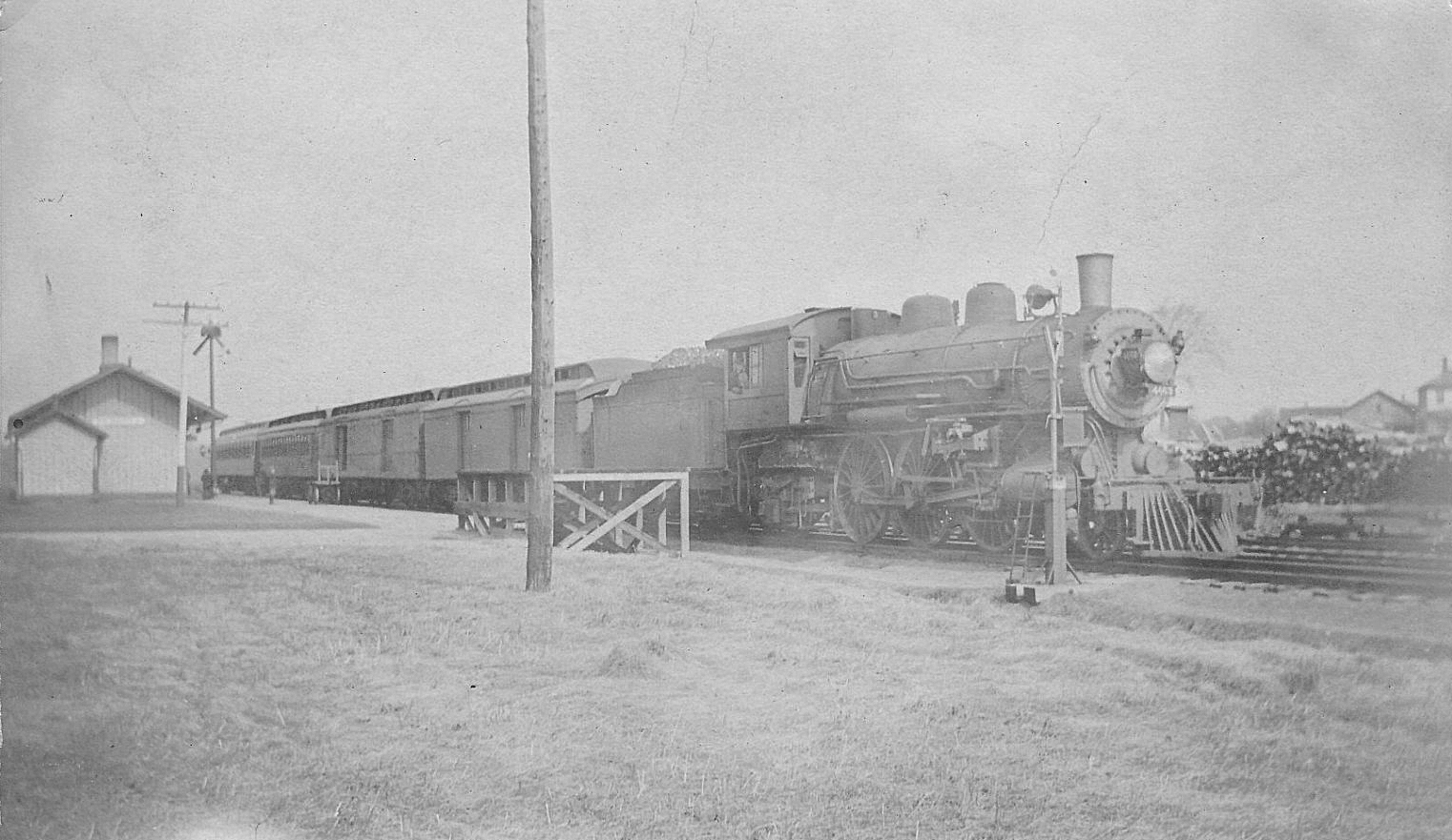 This railroad had two lines in Trumbull County, running the entire length of the county in the following townships: Liberty, Hubbard, Brookfield, Vienna, Fowler, Hartford, Johnston, Vernon, Gustavus, and Kinsman.

The Mahoning Coal Railroad and the New York Central Youngstown Branch  Submitted by Richard K. Fleischer The New York Central’s Youngstown Branch was one of the very few railroads in the U.S. that ran as a north – south direction railroad. Most every other railroad used the directions of east and west, even though that railroad may have run north and south. The PRR’s PY&A Branch, running through Trumbull County, was such a railroad, as was the B&O’s Lake Branch. Even though a train was traveling north, the railroad considered the direction to be west.

The Youngstown Branch had it’s beginning in Youngstown, Oh. with several local investors, among whom was the Tod Family from Youngstown.The company was incorporated on February 25, 1871 and was headquartered in Cleveland.  It was chartered to build a line from Youngstown to a point Brookfield Twp. as a standard gauge railroad. On December ninth, in the same year, the charter was amended allowing the company to build from Liberty Twp. to Andover, in Ashtabula County. At Andover, a connection was to be made with Jamestown & Franklin RR., which was under control of the Lakeshore & Michigan Southern RR.

The line was built to serve the many coal mines and coal banks between Youngstown and Andover, most of which were in Mahoning and Trumbull Counties. The line was 38 miles long. There were several branch lines built to serve these mines. As the line was being built two important branch lines. One was from Tyrrell or Tyrrell Hill to Vienna which was 2.85 miles long and was called the No. 9 Coal Bank Branch and one from Doughton to Hubbard to the iron furnaces of the Andrews & Hitchcock Company. There was once a small town at Doughton.

On July 1, 1884 the LS&MS amended their lease of the Mahoning Coal Railroad to be a perpetual lease. All MCRR trackage and equipment was transferred to the LS&MS and the MCRR became a paper railroad.  The LS&MS had been under the control of the New York Central & Hudson River RR. since 1877 and the interest in the MCRR was natural as the roughly parallel PY&A was being built a few miles to the west under the influence of the Pennsylvania Railroad. There was a great rivalry and competition between the New York Central and the Pennsylvania.

In 1888, the MCRR built a branch line to Sharon, Pa. that was nearly six miles long and at one time actually ran as far as Sharpsville.By 1899 The coal mines in Vienna had pretty much played out and the No. 9 mine branch was torn up as a result. At one time the town of Vienna had two railroads – the MCRR and the Liberty & Vienna RR. which became the Vienna Branch of the Erie RR. It, also was torn out in 1899. A small portion of the    No. 9 mine branch can still be seen today on the west side of Sodom-Hutchings Rd. east of Vienna. The year 1903 was an eventful year for the railroad. That is when the new, double tracked, “Low Grade” line was built from Brookfield Jct. to Carson in Ashtabula County. The “Low Grade” was much straighter than the old Mahoning Coal Railroad line. The “Low Grade” also eliminated some of the grades encountered on the old line. Much of the freight on the line was coal and iron ore, along with some general freight. The new line also avoided all of the towns on the old line

At the point of the “Low Grade” being built, the old line began to be referred to as the “High Grade.” Along the “High Grade” were all the small towns where there was local traffic. The two lines separated at Brookfield Jct. and came back together near Dorset via the Jamestown & Franklin. The low grade and the high grade crossed each other AND the Erie RR. at Latimer.

All the heavy freights were moved via the low grade line. Back in steam days some heavy mineral freights required three locomotives to get over the railroad. The high grade line is where all of the passenger trains and local freights ran. There was once a cider & jelly factory at Fowler (Nutwood), and a creamery at Kinsman (Farmdale).By 1907 this stretch of railroad was the most profitable part of the LS&MS Rwy. because of all the coal mining, iron, & steelmaking in Youngstown and Pittsburgh. Pittsburgh was reached by a NYC subsidiary called the Pittsburgh & Lake Erie RR. The paper railroad – Mahoning Coal RR. made so much money that it paid 100% of the companys market value in dividends every year for 30 years! In 1927 MCRR stock was trading for $1000 a share. The New York Times called it, “The outstanding blue chip of the stock market.”

By 1914 THE LS&MS Rwy. was consolidated into the New York Central Railroad. In 1920, the NYC began to buy up the available shares of the Mahoning Coal Railroad and by 1958 the NYC owned 80% of the MCRR stock.

Passenger Traffic from the 1953 Employee Timetable
Northbound – Train numbers 284 and 272  Pittsburgh – Buffalo ExpressSouthbound – train number 279 Buffalo-Pittsburgh Express.  Number 283 – The Pittsburgh ExpressThe only stop in Trumbull County for these passenger trains was a flag stop at Kinsman, so if a person desired to ride one of these trains, they would either have to get on the train at Youngstown or Kinsman since there were no other stops.Passenger service ended about 1961.

In Youngstown – McGuffey Yard
At Coalburg in Hubbard Twp. There was a large coal assembly yard at Coalburg, Oh. The remnants of it can be seen today when passing over it on the north side of Interstate 80, just west of SR 7. At Coalburg was also a roundhouse, turntable, water tank, coal dock, and a machine shop. His facility was built during WW1 and torn down about 1931. The Coalburg Yard was abandoned in the late 1920’s when the NYC consolidated it’s operations at the P&LE roundhouse at East Youngstown (Campbell, Oh.)  What was left of the terminal facilities at Coalburg, actually Doughton, was used as a pusher station. In steam days a locomotive was assigned here to push train up the grade from Youngstown to about Brookfield Jct., and return.

At Ashtabula – the West Yard.
Track speed on this line was 40 mph.
By 1961, the entire “High Grade” line of the Mahoning Coal Railroad was abandoned from Brookfield Junction to Andover. The “Low Grade” was left intact and is still in use today although it has been reduced to single track with controlled sidings. The line is operated by a centralized traffic control system in which all signals and switches are remotely controlled from an operator’s desk.

1968 brought the Penn Central merger of the New York Central and the Pennsylvania Railroads. The Youngstown Branch “Low Grade” was given priority over the Pennsy’s  PY&A Branch and got the lion’s share of the traffic. It hosted two priority freight trains – BP-5 and BP-6, which were Buffalo to Pittsburgh freights.
In June of 1970 Penn Central filed for bankruptcy.  Even so, there was still a lot of coal being handled by the railroad to the docks at Ashtabula and iron ore moving south from the docks to Youngstown and Pittsburgh.

In 1976 Penn Central and other bankrupt eastern railroads were combined into Conrail and the Youngstown Branch continued on.

Today, in 2020, it’s not business as usual on the Youngstown Line. Yes, the trains still run, but there are lots fewer of them since the Ashtabula Docks were closed in 2016 and coal, as a power plant fuel, is on the decline. Since the collapse of the steel industry there are also no shipments of iron ore coming out of Ashtabula. When the blast furnace at RG Steel in Warren was shut down, that spelled the end of the iron ore business

What’s left?There are a few remnants of the Mahoning Coal Railroad that can be seen today.At Hubbard – the Coalburg coal dock is still standing. When the foliage is gone in the winter, the turntable pit and the floor for the roundhouse stalls can be seen. The field that was once the freight yard at Coalburg can be seen from the I-80 bridge over the railroad. After being a freight yard, it was a scrap yard for many years. It’s now just an empty field.
At Brookfield Junction – at Warren-Sharon Rd. (old SR 82) the station can be seen here.  It is used as a business today. It should be noted, though, that the station is NOT the original Brookfield station. It is actually the station that used to be located at Tyrrell near King-Graves Rd. It had been moved to Brookfield Jct. after the original station had been destroyed by a fire?

At Tyrrell – the MCRR right of way can be seen here as well as a short stretch of the No. 9 mine branch abandoned in 1899, along the west side of Sodom-Hutchings Road.

At Latimer – The concrete bases for a MCRR water tank are still visible on the right of way of the high grade line, north of the former Erie Lackawanna Rwy. right of way.

At Farmdale – The station here served as the station for Kinsman and still stands, although it has been moved off of the MCRR right of way. It had been used for years as a woodworking shop, but seems to be unused today.