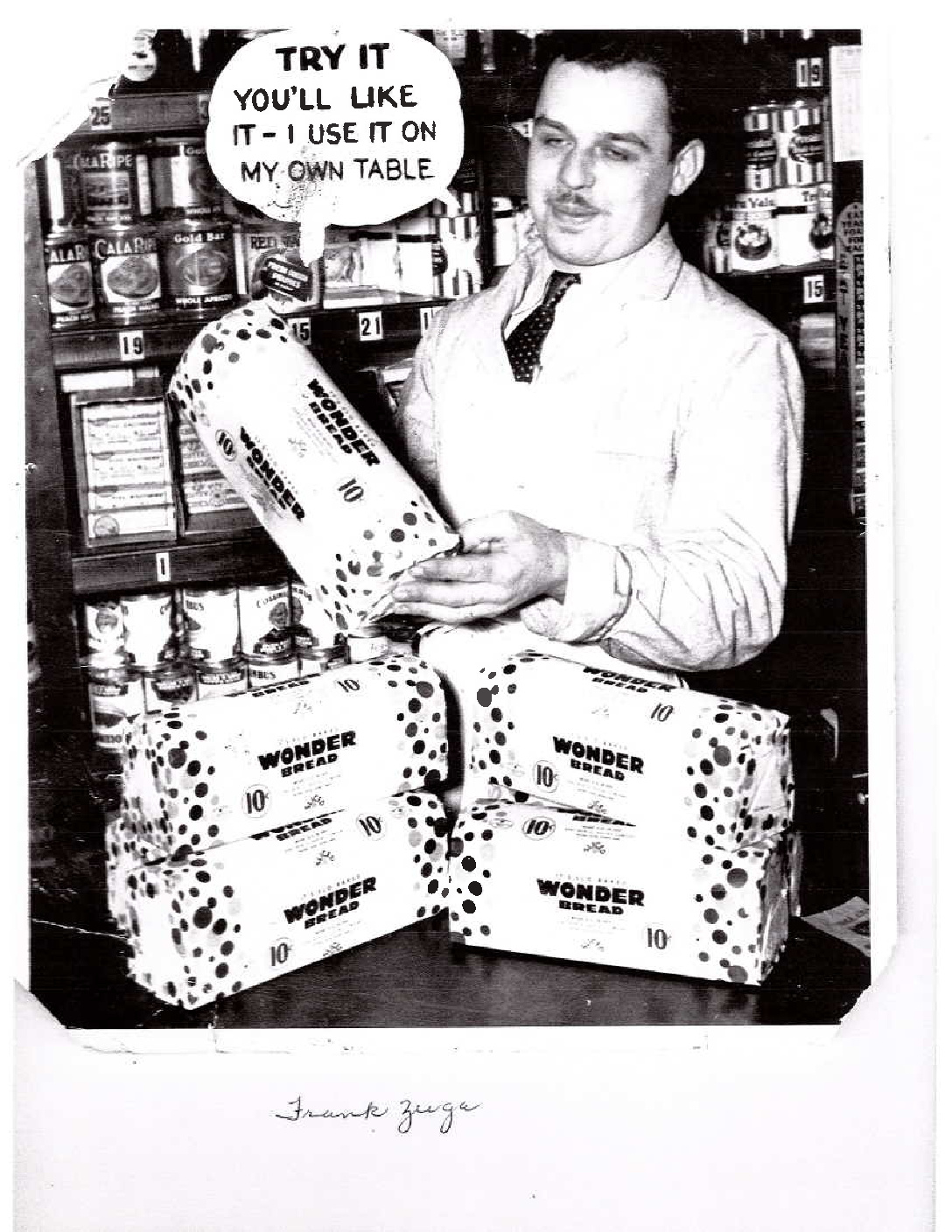 My father, Frank Zuga, was an independent grocer who worked in small privately owned stores during his working career. He started as a very young man working in a store in Warren on the 2200 block of Niles Road, owned by his brother-in-law. These were the days in the mid 30s with the customer shopped “over the counter” and the merchant presented merchandise requested by the shopper. Dad learned the skill of butchering through the self taught process under limited supervision. The store was quite small and was sold when his brother-in-law purchased a larger building on the corner of Burton Street and Niles Road. The area was known as “37 1/2” or “The Stop” because of the trolley stop located in the vicinity. The general area was identified by these names for many years.

During the time prior to World War II, the brother-in-law sold the store and moved to another store located at 1805 Youngstown Road where his family lived in an apartment above the store and they worked in the grocery store below. This was a common practice for independent grocers.

Dad and his brothers, Tony and Bill, built a store in the middle of the block between Milton St and Burton St on Niles Road, very near to the other locations. The Zuga Brother’s Market was built in the early 1940s and was the first self serve grocery store in the area. The shopper was able to go around the aisles with a cart and select their own canned goods, dairy products, produce, beverages, paper products and stop at the meat department to select the meat purchase cut to their specification. The brothers operated the market until they each joined the military and there was no one left to operate the store. It was sold, but the new owner maintained the Zuga name.

The brothers returned from their tour of duty at the end of World War II and Bill and Tony chose not to return to the family business. Dad went to work for a grocery family in Girard. He worked as a butcher and helped where he was needed. He missed the independence of being his own boss and he bought back the Niles Road market still carrying the family name. He hired a young man and taught him how to butcher the large hinds of beef and pork. He worked in the meat department under Dad’s supervision as well as in other areas of the store that were also supervised by Dad. There were two ladies working the cash register at the front of the store. They both lived in the neighborhood as did the young man he hired. That was very common practice in neighborhood stores.

Bill and John, Dad’s brothers, were branching in another direction during that time. They built the Warren Bowl on Youngstown Road (now an auto parts store). It started out with pin boys setting the pins in the alleys and later automatic setters were installed making it Warren’s first alley with automatic pin setters. That made it a much safer work environment, eliminating the danger of flying pins if the young pin setters did not get out of the way. Dad would occasionally work there on weekends to help fill in. The brothers also built the Warren Tavern right beside the bowling alley. This is now the Sahara Lounge. My father worked at the bar in the tavern on the weekends, but eventually gave that up because it involved too much night work.

Sometime in the 1950s Dad sold the Zuga Brother’s Market to a gentleman from Youngstown who also maintained the family name for a period of time and then he renamed the store. Later it became a Shop and Save, one of the early chain stores with independent owners.

After the two buildings on Youngstown Road were sold and the store on Niles Road was sold, Dad tried his hand at a few other jobs, but his love of the grocery business and butchering along with the opportunity to be his own boss led him back to the grocery business.

The Sopko Market located at 1806 Youngstown Road was for sale. The Sopko family had purchased the store from my uncle when he and his family moved to Arizona and now they, too, were moving on. Dad purchased that store in 1956 and he along with his partner (who was the young man he had trained back in the 1940s at the Niles Road market) renamed it the Quality Market. I started working as his cashier the day after my 16th birthday with a little bit of training from the National Cash Register representative. Once school started my job was done by a lady, who later became a resident of the upstairs apartment with her family. I worked on the cash register all school vacations for the rest of high school and college until I got married in 1963. My younger brother, Len, joined us in the store as soon as he turned 16. He was a stock boy, delivery boy, and whatever other tasks he was assigned. He worked all school vacations until he went to college, then his summers were occupied with ROTC summer cruises. The independent grocer usually put his family to work. We worked at the minimum wage rate of 50 cents per hour later advancing to $1.25 per hour.

The store was open from 8AM to 6PM, Monday through Saturday. It was not open on Sunday because Sunday sales of beer and wine were not permitted then.

Most grocery stores at that time were independent neighborhood stores. The ladies of the neighborhood would come in for one or two items needed to complete their family dinner, often wearing their aprons. They would put their purchases on a running tab that they would pay once a month, usually in cash. There was typically only one family car that the family bread winner took to work, so the lady shoppers would walk to the store for the small items they needed. Larger orders were called in by phone. These items were selected by the clerks or cashiers who took the orders, and delivered to the buyers front door.

Daily product deliveries were made to the store by the bread man, diary products that came from the Warren Sanitary Dairy, and produce that was purchased in Cleveland by a local supplier. Snacks and potato chips were delivered once or twice a week along with beer and sodas. All suppliers did their own inventory of the products that they sold and they stocked the shelves themselves. They were all known by name and quickly became members of the store family. They often stopped to chat and have a cup of coffee. Canned goods and other products were supplied in quantities by a Youngstown supply company. These were stocked by the store employees. The meat department was very personalized with special cuts to meet the shopper’s needs, fresh turkeys that were hand-picked by the proprietor for holidays and the butchers slaughtered, cut up and packaged the hunter’s kill, especially in deer season.

Eventually, many of the independent grocer owners joined together to form a local network called the Ideal Markets. This was the earliest forerunner to the chain stores. They affiliated and not only had business meetings to discuss issues and problems that occurred, but they gathered periodically for social and family events.

Many of the independent stores closed down when larger stores, such as A&P and Kroger, came to town. The competition caused shut downs or the merchants aged out of the business and often the next generation was not interested in continuing the business.

Independent owners put in many long hours and sacrifices to keep the stores in operation. An example that I recall occurred during the big Thanksgiving snowfall in the 1950s when all of the roads were snow covered and blocked. My dad started out in his car to cross town to open the store. The car got stuck in the snow bank along the way so he abandoned it with plans to retrieve it at the end of the work day. He then walked across town from northwest Warren to southeast Warren so that his customers could purchase bread and milk and other supplies for their families.

My father retired in the 1970s. He sold his share to his partner who ran the business until the big store competition was too much. New stores such as Valu King, moved into town with independent owners but with several independent affiliations in different locations in town. Other stores such as Tops and Fisher Fazio have come and gone. They were larger stores from other areas and they came into our town from cities where they had established themselves and began to take over the small grocers that were once the main food suppliers in our neighborhoods.

Convenience stores began to appear in many locations as time passed. They sold many products including grocery items and they were open for long hours. That made it even harder for the small grocers to survive. Later, stores such as the dollar stores in town sold grocery products and most of the items found in the neighborhood stores.

After Dad retired he still had the need to keep busy and missed the friendship of the small store along with missing his life-long occupation. He returned to work at a small independent store on East Market Street extension in Warren. He worked as a part-time butcher until his health would not let him continue.