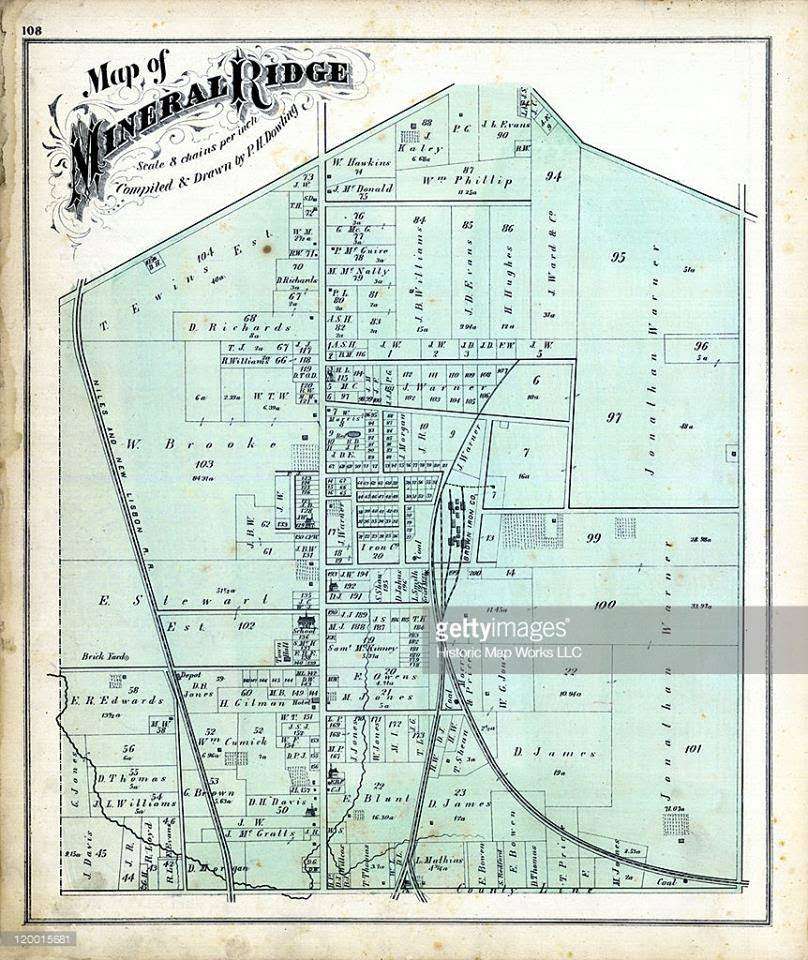 Mineral Ridge is an appropriate name for the village as it was a place where an abundance of coal and iron was found. The local supply of raw materials was the reason that the iron industry flourished in the Mahoning Valley for many years the way it did. Limestone would only have to travel a short distance from the Poland area to add to the raw material supply for the making of iron.

There were several mining companies in operation at Mineral Ridge. The first coal mines in the Mahoning Valley were opened about 1825, and by the 1870’s Trumbull County was the largest producer of coal in the state of Ohio. Mahoning Valley iron furnaces were the first in the country to use coal as an iron furnace (blast furnace) fuel rather than charcoal. This was because of the quality of coal mined in this area.

By 1856 the Mineral Ridge Railroad was built by two mining companies as a way to get coal mined at Mineral Ridge to the Pennsylvania & Ohio Canal at Niles for shipment. It was built to standard gauge.  There was a coal chute built on the canal where Mineral Ridge RR. cars could dump their coal directly into the waiting canal boats for transport to Cleveland, Youngstown, or to Portsmouth, Oh. on the Ohio River. A canal boat could carry about 70 tons of coal.

At first, the Mineral Ridge RR. appears to have been a gravity railroad, which means that the loaded coal cars were allowed to coast downhill on the east side of Mineral Ridge, to the P&O Canal.The coal cars were then pulled back up to the Ridge by mules to be reloaded. (This operation appears to have lasted about a year until the Mineral Ridge Railroad purchased a steam locomotive.)  Later on, a locomotive pulled the cars and a bridge was built across the Mahoning River so that coal could be directly interchanged with the Cleveland & Mahoning RR. This would be east of where SR 46 now is located, and roughly parallel to it.

The Mineral Ridge Railroad right of way is still visible just north of County Line Road. It can also be seen, and walked north of town, north of the high tension power line to the CSX railroad, AND you can STILL see coal along that abandoned right of way.

Along with coal, iron ore, called kidney ore, was seen in outcroppings along stream beds in the area. As the coal played out in the mines and the kidney ore was used up, black band ore was discovered  in the old coal mine shafts, so here was another source of ore that lasted for some time

.In 1857 Jonathan Warner had some mining operations at Mineral Ridge and in 1860 he partnered with James Wood to build the “Ashland Furnace” there. Included in the furnace complex were six beehive coke ovens. This was called Wood, Warner & Co.

By 1861 they decided to build another furnace near the Ashland Furnace. Because of a failure to get favorable freight rates on Lake Superior iron ore from Cleveland via the C&M RR. this second furnace was never operated, was dismantled and moved to the Sharon, Pa. area, was reconstructed, and went into operation there in 1862.

The old Meander Furnace, located near Austintown, hadn’t been used in years. It was dismantled and moved to Mineral Ridge in 1864, was set up near the Ashland Furnace, and was called the Porter Furnace. Over the years the company changed hands a few times and both furnaces were finally shut down somewhere between 1873 and 1875 never to operate again. They were torn down about 1880.

If you look at an 1874 Trumbull County Atlas, you can see where much of this was and parts of the Mineral Ridge RR. When in Mineral Ridge today on SR 46, you will see Furnace St. If you turn onto this street and go about 1/8 to ¼ mile you will be where the Ashland and Porter Furnaces once stood, but you’d never know it now, as it is now a residential area and everything concerning the furnaces has been obliterated.

The Moss Ancestral Home is located not too far from where the furnaces once stood and once served as the business office for some of the mines at Mineral Ridge.